Q & A with Erin Prophet

If you lived in Montana during the '80s and '90s you've heard the name Elizabeth Claire Prophet, a.k.a "Guru Ma." And you probably associate that name with media stories about Church Universal and Triumphant: bomb shelters, illegal acquisition of automatic weapons, and a major environmental disaster -- the result of leaky underground fuel storage tanks.

At the time, you may have wondered what the heck was going on over in the Paradise Valley. I certainly did.

The book is well-written and surprisingly nonjudgmental, which intrigued me enough to contact Erin and pepper her with questions. 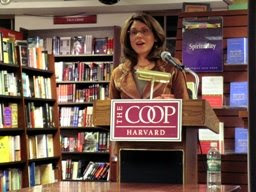 Can you describe the moment you decided to write "The Prophet's Daughter"?
The book began as a much larger project, which I had envisioned as a biography of my parents and a history of their church and principal followers. I decided to write it in early 1998, before my mother's illness had been diagnosed. I always intended it to be an accessible work for the general public that would show my mother's human side while revealing what I believe is a genuine spiritual gift as a charismatic leader and promoter of alternative religious thought. I began by conducting interviews with dozens of people who had known my parents and been inspired by their work. I planned to tie it together through my own story, but in the beginning I approached it much more as a historical account than a memoir. It went through many rewrites, with much of the history being cut out, then some added back in, at the request of different editors.

What research materials did you use to reconstruct the past? Diaries or journals? Newspaper clippings?
I had learned to take very good notes while in journalism school, and I had notebooks full of observations dating from the time I had begun to work for my mother, around 1985, through 1998. There was also a lot of material in the public domain, including newspaper clippings, court transcripts and other legal documents. And I had transcripts of many of my mother's public events.

Did you censor, or leave out, certain parts of the story in order to protect people, or yourself?
I tried to respect the privacy of people who were or had been in the church. A number of people asked me not to use their real names. My rule of thumb was to include only names of people who had given me interviews, or who had already been publicly mentioned in the press or in court documents. I could have made some people look worse than they did, including myself. I may tell a fuller story in the future, but I think that I accomplished my purpose in the sense that I was able to portray both what drew us together into a community and what pulled us apart.

What was your process of writing? Did you churn out pages while working at a "day" job?
I am almost embarrassed at how much of my life I have given to this project. It took ten years. Initially, I was a home-maker raising two boys and two step-sons while helping my husband to run his construction business. At that time, I had a few hours a day to write. After my divorce in 2002, I started a technical writing business with the aim of supporting myself as a writer. That was only partially successful, and I transitioned into work as a corporate trainer and project manager while finalizing my book. There was a very intense period in which I had taken a full-time job but I was also under contract to deliver my manuscript. I would get up at five, write for an hour before leaving for work, and then work several hours a day also on the weekends, as well as any vacation time that I had.

How did you find your publisher?
As I'm sure many authors have told you, finding a publisher is no easy task. I was introduced to my agent, Jane Jordan-Browne, by Patrick and Carol Hemingway in 1998. Jane had represented a number of celebrity biographies, and that was how she treated the project initially. She had some interest from big publishers, but I was told numerous times that my work was too journalistic and that I needed to write more about my own feelings. It has always been difficult for me to write about myself, and this was the most challenging part of the project. In 2002, Jane unfortunately died after a short illness, and her agency was taken over by Danielle Egan-Miller, who encouraged me to rework the project into a memoir. I chose to focus the story around the questions people might have about the shelter episode, which is of course the most well-known part of the story. I think I could have found a publisher more easily if I had been willing to write a "how-I-got-out-of-the-cult" book but I always wanted to portray the story in its complexity. I have never believed in brainwashing and I try to show, in addition to my mother's charisma, that she was meeting genuine spiritual needs, and that the expectations of the followers also played a role in her power. In 2005, Danielle and her assistant Joanna MacKenzie got me a contract with Penguin-Tarcher, but they ended up canceling it because I hadn't been successful in trimming the length. My friend the journalist Scott McMillion was able to connect me with Allen Jones at Globe Pequot, who was very interested in the project, and helped me to polish it into its final form. It was published in the fall of 2008 by Lyons Press, which is an imprint of Globe Pequot.

Did your siblings support this book project?
My siblings were very supportive in terms of sharing their time and memories. My brother Sean also helped with photographs. I was pleased when, after reading a final draft, they told me I had finally done it. I had been successful in terms of revealing our mother as a talented and loving but flawed human being. I appreciate their support and honesty in allowing me to portray their own struggles, because none of us comes off as perfect in the book.

How have CUT members reacted to the book?
I have had a mixed reaction from church members. I've gotten a lot of letters and e-mails from both current and former members, particularly people my age and younger, thanking me for having the courage and honesty to tell my story. On the other hand, some members have been pretty upset and felt betrayed. Many of them won't even read the book. It's become a badge of honor not to have read it. It was never my intent to destroy their faith, but I do believe that my story has important ramifications for the future structure of the church, particularly with regard to its teachings on evil incarnate and sexuality. The church leadership has tried to brush off the book as a "personal story" about the past that presumably does not reveal who they are today. I would hope that they would have the courage to admit the problems that come from some of the beliefs and publicly renounce some of the beliefs that led to the most important mistakes. I see my parents as pioneers who drew from many religious traditions. Our church was a laboratory for those traditions, and not all of them worked.

What has happened to CUT since your mother left as leader of the organization?
It is currently led by a group of conservative ministers. They have undone some of the restructuring that my mother supported towards the end of her working life. In what I believe was an apology for the excesses of her power, she had embraced a collaborative model that was supposed to allow the members more say in the direction of the church. However, the current structure, as I understand it, gives control to a small in-bred group, which I don't see as a positive step. They have arbitrarily dismissed many dedicated members whose only crime was to question their authority. If the church is to move successfully into the future, it needs to re-embrace the collaborative model and allow for evolutionary change, which was something my mother herself had done, in terms of updating earlier traditions when she first began her ministry.

Posted by The Write Question at 4:24 PM